Led by You helps young people get involved, have their say and provide opportunities to influence how we do things at MACS. Our 3rd issue of the Led by You Blog is written by Robyn, a Young Leader at MACS.

The blog king has been dethroned and exiled to France…

Cailain thought he was the ‘Blog King’, but there are two new Queens in town. These may look like cheap paper crowns from Burger King… but trust us on this one, they are legit Valentino crowns 😉

We aren’t like Mary Queen of Scots who gets rid of who she pleases, Cailain has got a brilliant opportunity to go to France and work for the Winter season (everyone here is very jealous of this, we wish him all the best and will miss him dearly; these thrones are pretty fab though).

Participation leads continue to meet and promote participation with staff – a young leader will also begin to attend these team meetings (aren’t we lucky). This will allow us to promote ourselves and Led By You (LBY), it also allows us to talk to other young people about what we do – and boy, do we love talkin’!

We welcome a new minion to our Queendom, we hear he goes by “Aiden”. He has been helping out with duties in LBY and also within wellbeing. His current duty is to Jack and Amit, where he is guiding them through a 6 week graffiti program to jazz up the back of the main office at 303, inspiration is from Newry housing and the fantastic efforts of the young people there – we aren’t copy cats, we promise!!

Look how amazing their work is!! 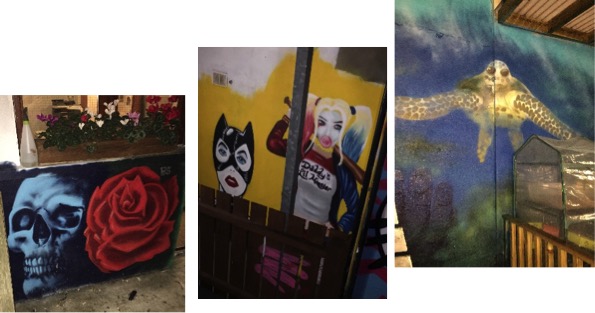 In October,  we took a trip down to Newry to launch our new LBY Participation Strategy. Cailain and Deirbhile spoke brilliantly, putting Trevor to shame! There were lots of different professionals there that are involved with young people from MACS, these ranged from the Trust, Housing Providers and Community/Voluntary agencies. 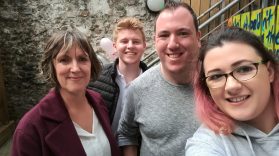 brilliant opportunity for us to promote LBY and the work we are doing. Massive thanks to Newry for allowing us to take part!

We as young leaders have been working alongside T-dawg (Trevor) to help us grow and for us to keep on top of our progress, we also have an outcome tool which we fill out every 3-6 months. This allows us to see how we are getting on, the improvements we have made and the steps that we have been taken whilst in our role. #squadgoals 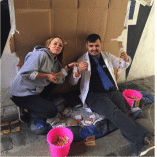 On the lead up to Culture Night, MACS had a subgroup running to plan the night’s activities. Young people and staff worked tirelessly to put together a show stopping showcase on the streets of Belfast on 16 September.

The organisers were so impressed that they even invited us back for next year and we are buzzing for what lies ahead.

New online feedback tool – We have also recently launched a new online tool to replace the old exit questionnaires. Since the majority of young people use a phone, we thought this would be a much easier and more current way to get feedback when young people leave MACS; rather than sending out a paper questionnaire.Because let’s be honest, if young people are anything like myself, it will be lost by the time its completed or the dog will destroy it before it is even looked at. At least the teeth marks on the forms give it a more personal touch.

Everybody wants to work for MACS! 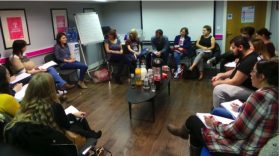 October, Trevor, Amit, Jack and Charley from Wellbeing took part in a workshop with Queens University Belfast on Social Work Values. This day was a great opportunity for new social work students to find out about young people’s experiences of care/working with social workers and allowed them to get feedback on how to be the best possible social worker while working with young people. Lorna and Sonia, who used to be trainees in Participate Now also took part and everyone gave incredible feedback, so much so that 5 of them said they wanted to come to MACS to work! Although they will have some tough competition from some of the Young Leaders who also are wanting to work at MACS… maybe a duel between the two to see who gets the job will be in order, watch this space!

Power to the leaders

The Young Leaders have also been acting as a steering group for funding applications in LBY – we have been working alongside Trevor to look at the outcomes of the project and giving our ideas and feedback on the application ideas. Being in this position gives us a feeling of great power, similar to how Donald Trump must have felt when he won the election. Only difference between us is the fact we will not be building a wall anytime soon, our funding application for it keeps getting refused! 🙁 Although, a wall with MACS plastered all over it would look pretty good. 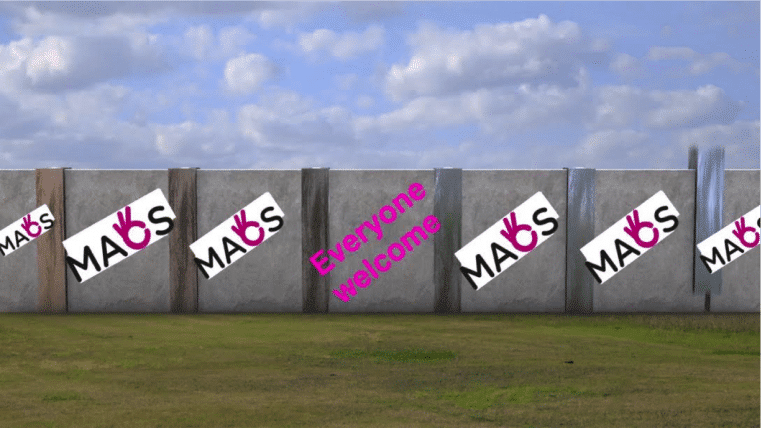 Young Leaders on fire ? with the annual report 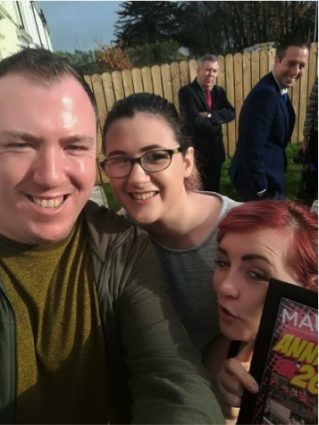 In November, Trevor, Deirbhile and Kathy spoke at the Lisburn Integrated Housing Launch about LBY and showcased the front cover of the new Annual Report. Massive thank you to Iain (Floating Integrated Manager) for doing the design work and space to present it on the day.

The Housing Executive asked Kathy and Deirbhile if they would come speak to their marketing team for ideas on how to create such an innovative and exciting piece of work with their team! The presentation went down a treat!

The Shadow Board has continued to meet regularly, focusing on the editing of the Annual Report which is now with senior management and once they have given the green light we will review the design by Iain and finally get it to print!! We have worked so hard on this for a year and we are so proud of the outcome. Everyone is so excited to see a physical copy of it, our excitement levels are similar to the politicians at the DUP Annual Conference when they were chanting and dancing to “Arlene’s on fire”. In our case it’s the Young Leaders who are on fire ?

Also in November, Cailain and Deirbhile did the Belfast Housing Service Review and did a great job in listening and recording what the young people had to say. We have several reviews coming up where we will continue to get feedback using our sparkly personalities and lots of Trevor’s stolen pens!

We bid a sad farewell to Cailian (even though his position has been usurped with an equally as witty Queen writer. We had a mammoth breakfast in Maggie Mays including milkshakes, delicious but not good for the waistline! 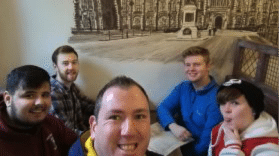 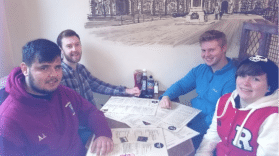 While we are cold here in Northern Ireland, he gets to be cold with the added benefit of skiing in France. It’s hard to pity him really! Thanks for all your hard work with Led By You and we will see you when you come back ?

ps the crown is mine! 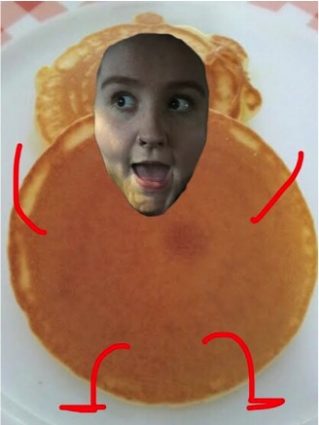 On placement with Trevor; or in other words pancakes

For a week in December, I had the pleasure of being on placement with Trevor.  I was kept nice and busy with various opportunities. From promoting LBY in Downpatrick, meeting with Down Art Centre to discuss some exciting upcoming projects, completing Newry’s Service review with Amit, making brunch for young people in Belfast Housing alongside Aiden, to speaking in front of all the staff for all housing services and letting them know a little bit more of what we do in LBY – which was probably the worst part as public speaking is not a great strength of mine… you can get similar facial expressions if you look up “deer in headlights”.

It was a crazy, jam-packed two weeks that consisted of a lot of pancakes and tea runs; honestly was about to turn into a pancake by the end of the two weeks. I must say, I think the pancake lifestyle suits me.

To finish the crazy two weeks, all the Young Leaders got together with Trevor to have our Christmas dinner, we also had the pleasure of Mary and Jude joining us.

There was great banter had, plenty of smoke breaks and enough parmesan used to create a parmesan famine in Belfast.

Being fabulous at the Lord Mayors Christmas Lunch

Being the fabulous Young Leaders we are, we wanted to leave 2016 on a high. Trevor, Kathy, Amit, Matty and myself had the privilege of attending the Lord Mayors Christmas Lunch at Belfast City Hall, organised by the Council for the Homeless. This was a great chance for us to network with lots of new people and to also do what we do best – promote LBY.

Of course a photo with the Mayor by the Christmas tree was essential, would it really be an outing with MACS without 6 million different photos being taken for only one to be used in the end? 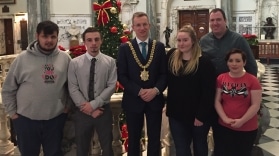 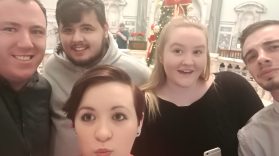 Lunch ended with us giving the mayor a cheeky wee invite to some upcoming events, maybe at one of those events I will be able to wear his gold necklace. We look forward to all further work we may be involved in with him.

This is the point I stop boring you all and say goodbye. I hope 2017 is a year filled with happiness and joy for everyone.